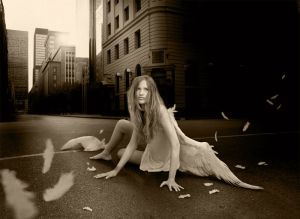 There aren’t many people who haven’t heard of Lucifer; the whole story of how he got a God complex and was thrown out of  Heaven with his minions is pretty well- known.

A lot of people wonder, “What would make an angel ignore all the perfection of heaven enough to get cast out for all eternity by a forgiving God?”  Believe me. I’ve been asking myself that same question ever since God decided He didn’t want me there anymore, either. See, what people don’t realize is that Lucifer and his buddies aren’t the only ones that got banished from Heaven- they’re just the only ones who got any publicity.

People call me Zu, but my real name is Pharzuph.

I can’t say that I’m completely unrecognized. You’ll find me mentioned in the angelology texts as the fallen angel of fornication and lust. Hey, it could be worse. I’d rather be known as a whore than be stuck ruling a burning lake of fire, wouldn’t you?  I guess you can probably figure out now what got me kicked out of Kingdom Come.

Anyway, I guess God had a little soft spot for me, because he didn’t send me straight to Hell. Instead, I’m stuck here in this shithole of  reality called New York City. On the plus side, I get to do what I do best. To clear things up, I’m a high-class escort, not a two-dollar hooker. Like there’s a difference. The only distinction between the two is soap and a couple hundred bucks.

Check back for more of Zu’s story! XOXO